Skip to content
I was wandering in an Office
Depot looking for office supplies when I happened to be drawn near the
electronics area and saw a display for small LCD TV’s. 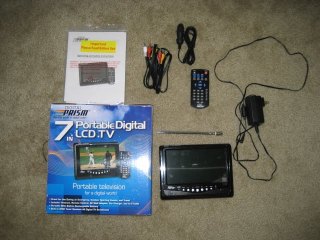 Suddenly, the idea of having a portable TV for nights at
anchor on “Fashas Dream” or in my home office area or as a part of the
hurricane kit seemed like a great idea. And the price was awesome at $89.99.
Knowing the corrosive nature of the salt air, I opted for the
replacement plan and walked out for less than $120. This all played in nicely
with plans for three days on board “Fashas Dream”. The forecast was chilly and
I pictured at least experimenting with the TV to see her performance.

I got her home and dutifully followed the charging
instructions with the provide AC adaptor to ensure the built
in batteries are
fully charged before the first use. Also included were a remote, AV cables, an
antenna that mounts in the cable connector jack, and a 12 volt cigarette
lighter adaptor for power while traveling. The unit itself is simple.
The remote layout is odd to say the least, but it works. Not
that I intend to view it from a long distance, but to prevent having to pick
the unit up every time you want to adjust the volume, channel, etc..
On to the practical stuff. It’s a basic black unit with
silver push buttons on front. On the left side is the power switch and jack for
a power supply. On the right is a threaded coax jack, three AV jacks (right,
left, and video), and a head phone jack. The external antenna threads into the
coax jack for the portable function.
I first tried it with the external antenna. I used the menu
and scanned for stations. Remember we now have only HD channels. So after about
ten minutes there were a half dozen stations available. The channel selection
was limited of course. The picture quality was good for its 7 inch screen. The
strongest signals locally were from ABC with a weather channel and their normal
broadcast channel.
I then tried it with a DVD player and it worked fine. Audio
is what you’d expect for a small TV, so I used external PC speakers for
bringing out the sound.
With cable in place of the antenna the broadcast resolution
is excellent for its little 7 inch screen. I often use it on my desk with
plenty of space to spare for all my other stuff since it’s just about the size
of a decent sized picture frame.
The biggest limitation is what stations you can receive with
your particular antenna in your area. I like this unit and use it nearly every
day. It’s nice that it has the threaded external coax to allow you to connect
to any decent coaxial quality antenna system, cable or even satellite system.
All in all a thumbs up.

Postscript: The biggest weakness is the digital channels that can be received. Maybe 1 or 2 at most when in the past it could have been as many as ten. It’s pretty obvious that our “technological leap” forward in TV bandwidth virtually eliminates true broadcast tv. ugh.

Mid-life retired reservist in the corporate IT world parenting a grandchild. Sharing my evolution as age and priorities impact life. View all posts by 21Buzzards