After my father passed, I received an old Waltham pocketwatch from his belongings. The story behind it was that he found it and attempted to find the owner. He even went so far as to contact the pocketwatch company and attempt to track the owner with the serial number. His effort failed. 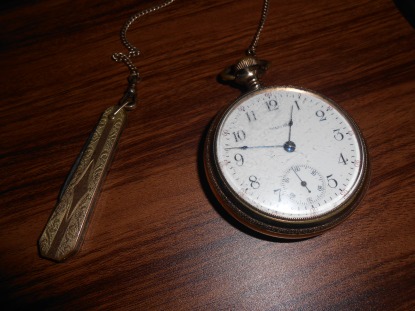 As I thought about it, my dad was filled with a lot of conundrums. On one hand, he was a successful accountant, trusted by a lot of clients, carried a certain amount of prestige in our small two and was a president of the state CPA institute. And the pocket watch showed his desire to go above and beyond with honesty and pursuit of truth.

On the other side, he spent years in an affair while married to my mother. When discovered, instead of being clear about what he wanted and honorably facing up to his choices, he pressured my mother to divorce him instead of doing it himself. Maybe it was simply a manipulation of the times that gave him some advantage or maybe it was to construct a narrative in his own mind that she asked for it.

And as they went through their divorce, he hid assets and used his connections with members of the local courts in his good old boy network to be awarded a ridiculously low child support.

When I was ten or eleven, I’ll never forget witnessing the pain and sadness on my mother’s face as she bent over an old antique secretaries desk, working through her checkbook. I asked Mom,”What’s wrong Mom?” In tears she burst out that she didn’t know how she was going to make ends meet. I hugged her, but what could a kid do. I tried comforting her, but I couldn’t help.

But when I would visit with my dad, he had a new sporty car, a new large house, was newly married, a new step daughter and never had a shortage for anything. While Mom was struggling to make sure we had food and clothes.

At the time, I think I was too young to really put it all together. How slanted the whole thing was. And my siblings all had their own impressions of things, all of it an independent viewpoint, but none of it positive.

He was far from perfect. I’ve tried to learn as much about what not to do as what to aspire too from my dad.

So, when I see this pocketwatch laying on my dresser, every once in a while it makes me pause and think of the complexities that made my dad.

Mid-life retired reservist in the corporate IT world parenting a grandchild. Sharing my evolution as age and priorities impact life. View all posts by 21Buzzards